By
Lisa Hoehn
Just try not to get gripped while reading

Earlier this summer, news broke that The Kingsbridge Armory, a long-abandoned fortress in the Bronx, is at the center of a bidding war between investors—one of whom hopes to turn the former castle into a monster-sized ice arena (yawn) and the other who wants to build the world’s tallest indoor climbing wall (ooh!).

While sources haven’t released the exact height of the proposed wall (only that the “unique building” would allow for its stature and would instantly put the new gym on the world map), that got us thinking: Where are the tallest man-made climbs, anyway?

So, we found out. Here, five of the world’s highest, most harrowing climbing walls—each one topping 100 feet.*

Architects Arons & Gelauff took this 87-room dormitory at Twente University in Enschede, Netherlands, and turned it into the second-highest climbing wall in the country. With 2,500 grips and an adjacent bouldering wall, this top-rope climb was finished for student use in 2007. (Anyone else ready for college again?)

*Alright, alright, I admit it—this wall is actually one foot shy of 100 feet. But, as the editor, I have taken the liberty to decide that the awesome-ness of this building earns it the extra foot it needs to make the list. 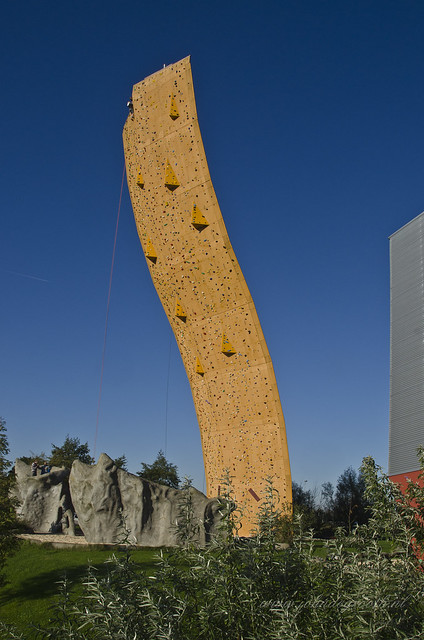 Free-standing and (seemingly) free-leaning, Bjoeks climbing wall—known to most as Excalibur—casts its shadow over Klimcentrum Bjoeks (Bjoeks Climb Center) in Groningen, Netherlands. The yellow tower was partially designed by an architect (which explains its sleek silhouette) and boasts 24 routes to the top (36-foot overhang optional).

Gaining the Guinness Book of World Record’s stamp of approval in December 2011 for the world’s tallest freestanding climbing wall, Historic Banning Mills’ tower comes complete with routes from 5.5 to 5.12 and four overhangs. Make it to the top, and the facility assures you, “You will feel absolutely on top of the world!”


Starting on this hotel’s second story ledge and scaling holds attached to the building’s outer wall, this climb tops out 200 feet above the grimy glorious Reno skyline. Marketed as the “tallest climbing wall in the world,” it’s clear the country that they’re ignoring (ahem, see below)—but hey, as the “biggest little city in the world,” a little hyperbole seems built into their genes. 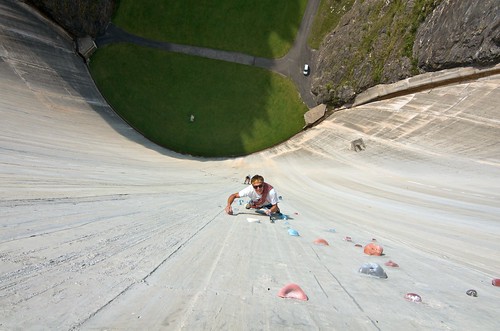 Bolted in the 1990s, this five-pitch behemoth is built on one of the faces of the Luzzone dam in Switzerland and is currently the tallest climbing wall in the world. Climb it yourself…or maybe just vicariously through this video: