Why Are Your Muscles Sore After a Workout?

The Greatist Team—We’ve all been there: You’ve crushed a tough workout only to be rewarded with stiff, aching muscles the morning after. Turns out that uncomfortable feeling, otherwise known as delayed onset muscle soreness (DOMS), is actually a pretty normal side effect of the muscle rebuilding process.

What You Need to Know
Despite the prevalence of DOMS, the exact mechanisms that cause it are not totally understood. Currently, most think it’s a result of microscopic tears in the muscle and surrounding connective tissue as a result of eccentric exercise. The eccentric phase of a movement occurs when a muscle is lengthening (sometimes referred to as doing “negatives”). Classic examples would be lowering a dumbbell back to its starting position during bicep curls or running downhill. One thing DOMS doesn't involve? The build-up of lactic acid, which is actually a common myth. (Lactic acid is gone from your muscles within about an hour after your workout.)

And DOMS isn’t just about soreness. Symptoms can include weakness, stiffness, and sensitivity to touch. The discomfort usually starts to appear within 12 to 24 hours after exercise, peaks after 24 to 72 hours, and should disappear within three to five days.

But here’s the good news. Because the body builds tolerance and adapts pretty rapidly, DOMS should become less frequent as you continue exercising at the same intensity. Plus, just one soreness-inducing session reduces the chance of the same workout making you sore again for weeks or even months. 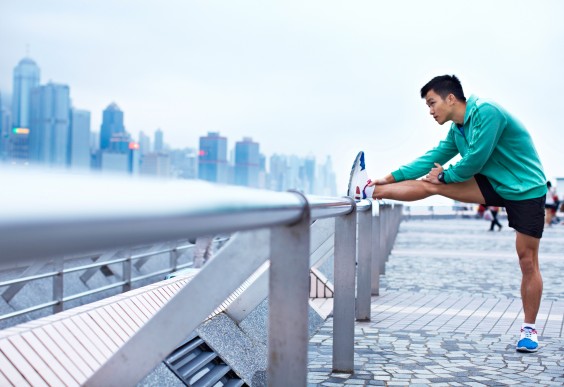 To date, science has yet to find a definitive way to alleviate DOMS every time it occurs. Letting your muscles rest seems to be the best (albeit obvious) option. However, there may be a few steps you can take to be kind to your body along the way. Tart cherry juice, ginger, and turmeric are all natural anti-inflammatories that may help minimize the pain. And in smaller studies, both watermelon juice (yum!) and the topical application of arnica have also provided relief.

Other studies have shown that, at least in trained athletes, cold water baths or alternating hot-and-cold water baths may have a positive effect on recovery time. Before you start filling your tub with ice, though, note that these studies didn’t examine pain relief, only performance recovery.

And believe it or not, the jury is out on whether over-the-counter pain relievers (like acetaminophen) and nonsteroidal anti-inflammatory drugs (NSAIDs) provide much help. Though acetaminophen appears to be effective at reducing pain—thereby allowing athletes to push harder and improve performance—it may not be effective at relieving the pain associated with DOMS. And though one study claims that NSAIDs (drugs like ibuprofen and aspirin) may have a positive effect depending on dosage and the time of administration, more recent studies have found that the over-the-counter form is ineffective.

One last thing to consider? Recent studies have shown that chronic use of NSAIDs may actually inhibit muscle growth, though they may be OK to use occasionally.

To sum up: There’s not a great OTC solution for the muscle aches you get the next morning. Passive stretching and other homeopathic approaches have also been unsuccessful at alleviating DOMS symptoms.

No Pain, No Gain?
Soreness is a natural effect of exercise and a sign muscles are benefiting from all that hard work. Most people will experience muscle aches at some point, especially if they’re new to working out or starting a new training program (sorry!). In order to improve, overloading your muscles is required, but there’s also a law of diminishing returns in fitness. That’s the tipping point where you won’t get any more out of your workout and might do more harm than good. So if you’re in pain during exercise or if your pain lasts longer than a few days, it’s probably time to see a doc. Otherwise, train hard, rest up, and enjoy the benefits of a stronger, healthier body.

Related:
How Long Does It Actually Take to Get Out of Shape?
18 Ways to Change Up Your Running Routine
The 20-Minute Kettlebell Workout That Strengthens Your Whole Body