By
Monica Prelle
With ripping singletrack, remote roads and stunning mountain scenery, this town is a biker's paradise

It was a slow go, winding my way up and up and up Glacier National Park’s Going-to-the Sun Road. But it wasn’t for the big mileage or the 3,300-foot elevation gain or even for the fact that it was my very first time on a road bike. It was mostly because I, wide-eyed and gape-mouthed, couldn’t stop snapping photos. Around seemingly every bend lay another rugged, snow-capped peak, cascading waterfall or a dramatic cliff that deserved remembering, and I think I photographed all of them. Such are the dangers when you’re pedaling one of America’s most spectacular roads through one of its most remote wilderness areas.

It was mid-June, but full-on summer hadn’t yet hit the Whitefish Range at the northern tip of the Rockies. In fact, an unseasonably late snowfall had recently socked-in the higher elevations. Combined with a road rehab project, it kept the road closed to vehicular traffic later than most years. While some tourists were forced to re-route their travel, cyclists like me couldn’t have been happier.

Armed with two cameras, water and snacks, I slowly made my way up the grade on a rented Specialized Roubaix. Though I was new to road biking, I felt good. My legs pumped rhythmically as I ascended steadily through the crisp, cool air, taking in the scenery in a way that you rarely can from a speeding car. (Yes, I fell in love with road riding and bought a bike a few weeks later. And yes, I still love mountain biking.)

The Going-to-the-Sun Road was the first American roadway designated both a National Historic Landmark and a National Civil Engineering Landmark. Planning for the road began in 1918, but it wasn’t until 1924 when construction started. The road was finally completed and opened to the public in 1933, and it’s been a tourist destination ever since.

Two naturalists from the park service chatted with cyclists at “the loop,” a massive hairpin turn and the only switchback on the west side. They’d spotted big horn sheep on the mountainside and pointed out a pika hiding in the rocks. The valley below was green with spring foliage and wildflowers were just starting to bloom.

Further up the road, water poured off the Weeping Wall, dousing the road and cyclists with its mist. Road access was closed just below 6,647-foot Logan Pass, but from the turnaround the view across the valley to Bird Woman Falls was breathtaking. At the top, a cyclist showed off his photos of a black bear crossing the road and an overly bold deer licked cyclists’ salty hands.

It was turning out to be an epic two-wheel weekend getaway in Whitefish, Montana. Situated near the west entrance to Glacier National Park, Whitefish is an adventure portal for Montana-bound cyclists. From cross-country mountain bike trails to scenic road rides, there is no shortage of bicycling in and around Whitefish. Here’s a run-down on the best rides and spots for cyclists.

Best Road Ride: Going-to-the-Sun Road, Glacier National Park
For cyclists, there truly is no better way to take in the alpine views from the Going-to-the-Sun Road than from a bicycle. For a good leg burn, start at the west side at the West Glacier entrance. Pedal up 16 miles and more than 3,000 feet to Logan Pass, which is located on the Continental Divide at 6,647 feet, and return the same route. If you’re visiting midsummer, make sure to get an early start; from June 15 through Labor Day, sections of the Going-to-the-Sun Road are closed to bicycle use between 11am and 4pm. If you can, time your visit with the shoulder season (early June and late September) when the road is closed to vehicular traffic. Full moon rides are also popular with the locals and in-the-know bicycle travelers.  http://www.nps.gov/glac/planyourvisit/bicycling.htm 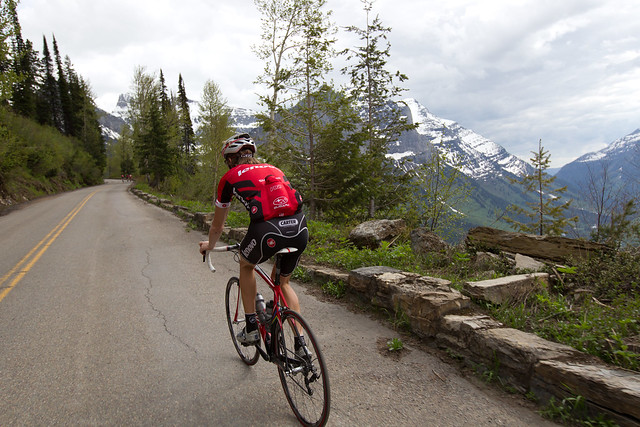 Best Cross-Country Trail: The Whitefish Trail
Miles of buttery singletrack and gated logging roads roll through ponderosa pine and larch forests, past refreshing lakes and over fun, bumpy terrain on Whitefish’s newest namesake trail. The multi-use path traverses both public and private land, offering stacked loops, flowy switchbacks, fast descents, bermed turns and even a heart-pounding section that skirts the edge of a rocky cliff (look out, not down). Start out at the Lion Mountain trailhead and head as far north as North Beaver Connection for a roughly 20-mile roundtrip pedal.  whitefishlegacy.org 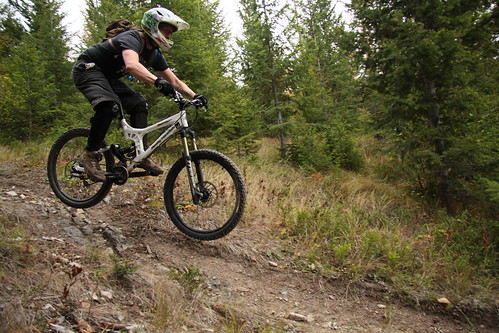 Best Downhill Mountain Biking: Whitefish Mountain Resort
Whitefish Mountain Resort (formerly Big Mountain) offers lift-accessed trails for gravity junkies who aren’t willing to invest the sweat equity (it’s more bang for your buck, right?). There are more than 20 miles of singletrack and trails for riders of all levels, and two new trails are expected to open by the end of summer. For now, challenge yourself on the berms, drops, jumps and wall rides of “experts-only” Runaway Train. To get your adrenaline pumping, preview Runaway Train here.  skiwhitefish.com

Best Bike Shop: Great Northern Cycles
With top-notch pro-level Specialized bikes for rent and a hip organic coffee bar tucked inside the shop, Great Northern Cycles is the locals’ favorite and your one stop pre-ride shop. Still not sure where you want to ride? Try joining one of the shop’s four-times-a-week organized group rides, or just ask for recommendations. Grab a cup of “Cannibal” (named, of course, for legendary cyclist Eddy Merckx) high-octane coffee, a rental bike and a spare tube, and you’re ready to hit the road or trail.  greatnortherncycles.com

Best Local Beer: Great Northern Brewing Company
Kick back after a hard ride at Great Northern Brewery’s Black Star Draught House, where you can wash down hearty sandwiches and juicy burgers with local brews like Hell Roaring Amber or Going-to-the-Sun IPA. If you’re lucky enough to visit Whitefish when the brewery hosts a beer pairing dinner, don’t miss it.  greatnorthernbrewing.com