By
Yahoo Travel
Which of these infamous camping states is best for your next trip?

Colorado and New Mexico consistently rank at the top of most camping bucket lists. From sparkling streams and lakes to significant archeological sites, these neighboring states have an allure that is hard to pass up, regardless of your camping style. Bring a tent or bring a million-dollar motor coach. Either way, the campgrounds here are worthy of your time. But don’t assume they are identical twins. There are differences in attitude and differences in altitude.

The Case for Colorado 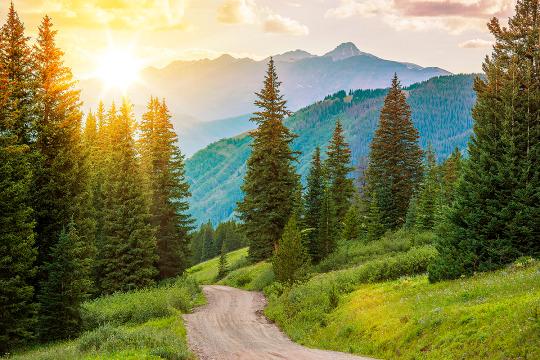 With mountains, forests, and lakes, Colorado is an outdoor-lover’s dream. (Photo: iStock)

The Centennial State is laid-back, high-tech, and outdoorsy. The people work hard, play harder, and take their commitment to their stunningly beautiful state seriously. Activities to pump up your camping trip include hiking, climbing, fishing, birding, whitewater rafting, boating, and even brewery tours. 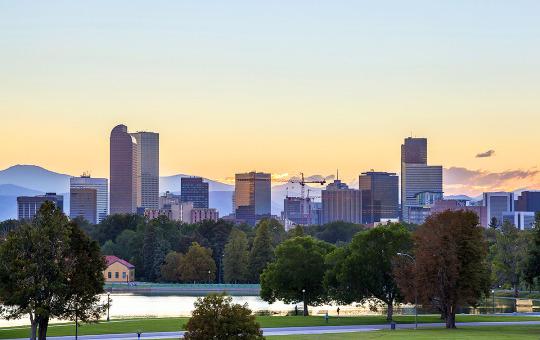 More than half the state’s population is in and around Denver. (Photo: Thinkstock)

Colorado has a relatively skimpy population of around 5.5 million residents in a space of 104,000 square miles. More than half of the population is concentrated in and around the Denver Metro area or along the corridors of the two interstate highways that cross the state. I-25 runs north and south, while I-70 runs east and west. Stay off that grid to avoid the heavily populated areas, but be warned, tourism can double the number of people in state at any given time. More than 60 million people visit Colorado each year, spread almost evenly across the seasons. 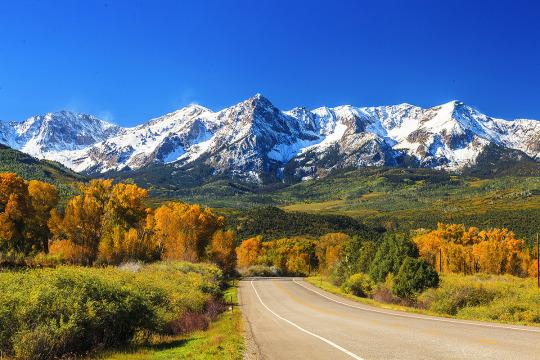 Colorado is home to no less than 53 fourteeners! (Photo: Thinkstock)

The eastern third of the state is fairly flat. Think Kansas and Nebraska. If you are looking for mountains, look west of I-25. And then look up. Way up. The state is home to a whopping 53 fourteeners — the mountaineering term for peaks over 14,000 feet in elevation. That is impressive considering that there are only 67 fourteeners in the continental U.S. Colorado claims the second, third, and fourth highest peaks in the lower 48. But the statistic that really helps clarify the terrain here is the total number of peaks above 13,000 feet — a breathtaking 690! Compare that to California at 158 and Alaska at 73, and you begin to understand the vertical nature of Colorado. 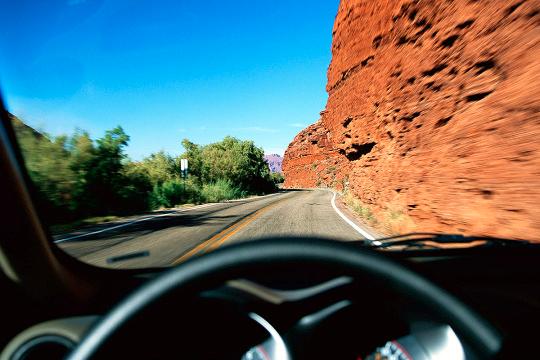 The winding roads in and around all those mountains can be especially difficult. (Photo: Steve Craft/Masterfile/Corbis)

Those mountains and the roads that connect them are precisely why getting around the state can be a challenge. There are no shortcuts in this state. When you see the word “pass” on a map, replace it with the word “difficult.” Even the best four-lane highways in Colorado have passes known to destroy transmissions and brakes on steep inclines. The best advice for traveling in the state is to plan your route, make sure your vehicle is in top condition, and then add extra time. Assume that anything other than the main highways could be dirt, which often translates to “mud.” If a road is indicated as four-wheel-drive on a map, app, or guidebook, take that warning seriously.

Tip: Keep in mind that altitude sickness is a real thing. If possible, start your camping adventure well below 9,000 feet then gradually move to camps at higher elevations each day. The CDC offers advice for traveling in higher altitudes. 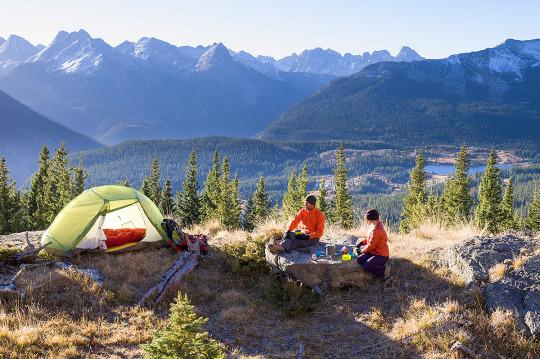 The bulk of the state’s campsites are in public camps located in eleven national forests, with facilities ranging from primitive (think non-flushing toilets) to quite developed (think electricity and running water at each site). Most will have level sites for tents or trailers, a metal fire ring, and a picnic table. The heaviest use areas are in the central part of the state, where NFS campgrounds feature moderately spaced sites in well-developed parks.

Low altitude campgrounds tend to have more development than those farther up the mountains. One exception is Matterhorn Campground near Telluride. At an elevation of 9,500 feet, you can still enjoy creature comforts like a bathhouse with hot showers and paved roads. Of course, you will share the camp with everyone else seeking those comforts, so reserve your spot in advance at Reserve America. 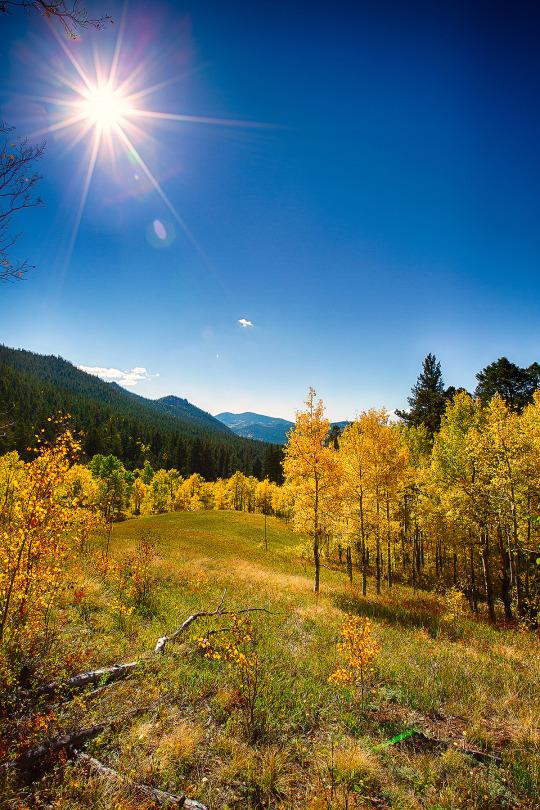 Golden Gate Canyon State Park, just an hour outside of Denver, is a great alternative to the national parks. (Photo: John B. Kalla/Flickr)

Colorado has an amazing array of state parks, including a handful of urban parks with camping in the Denver area. Most state parks offer slightly more development than NFS campgrounds. Look for widely spaced sites with water and electricity, plus shelters, cabins, yurts, showers, and flush toilets. Sites at most parks can be reserved online. 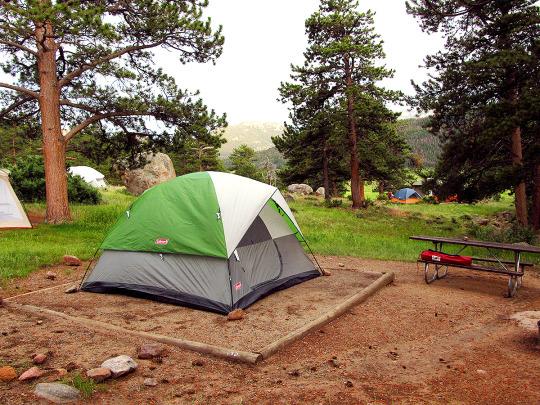 Colorado has many national parks and monuments to camp at, including Rocky Mountain State Park. (Photo: Jasperdo/Flickr)

Colorado has a total of thirteen national parks and monuments, many with camping options. Rocky Mountain National Park is the gem of the central part of the state. It is both stunning and accessible. There are camping choices for every style of camper, from backcountry to RV'ers.

For an amazing archeological experience, visit Mesa Verde National Park in the far southwest corner of the state. The campground is essentially parking-lot style, but staying the night here allows you early-morning access to the cliff dwellings while temperatures are comfortable. The number of visitors is carefully regulated at the various sites in the park so plan your visit according to the schedule.

Dinosaur National Monument offers a chance to get a look at the amazing cliff face bearing 1,500 visible fossils at the Carnegie Quarry. Definitely not your average camping trip. 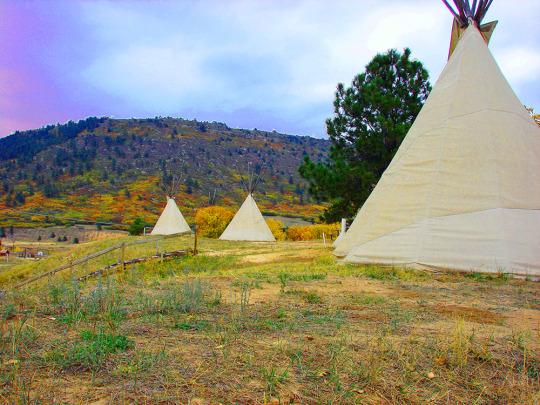 Camp at Jellystone and have your choice of sleeping in a tent, yurt, RV, lodge, or cabin. (Photo: Jellystone Park at Larkspur)

Colorado has privately owned campgrounds that include crazy-fun facilities like Jellystone Park at Larkspur. There are parks that blend camping into a dude ranch atmosphere like Fun Valley. And there are luxury RV parks like Tiger Run Resort. Find the private park that suits your needs at the Colorado Campground and Lodging Owner’s Association website. 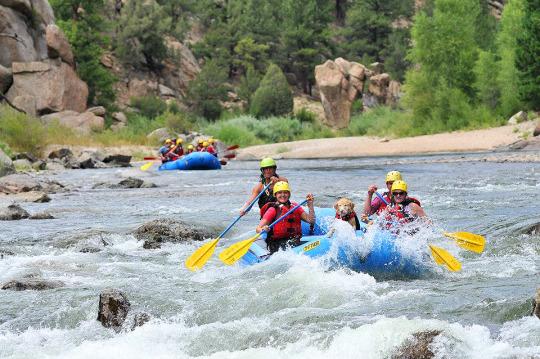 There’s plenty to do at Collegiate Peaks including rafting, hiking, and drive-in. (Photo: Browns Canyon Rafting/Facebook)

My absolute favorite campground in the state is Collegiate Peaks. It can get a little crowded, but there is so much to do in the area, including rafting in Brown’s Canyon, an honest to goodness drive-in theater in Buena Vista, and easy access to hiking in the Collegiate Peaks Wilderness Area, home to eight of the state’s fourteeners.

The Case for New Mexico 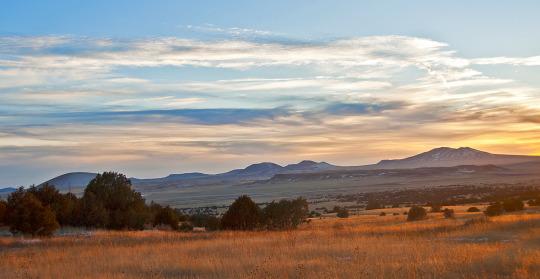 New Mexico has plenty to offer as well, including hiking and biking and spectacular desert views. (Photo: Thinkstock) 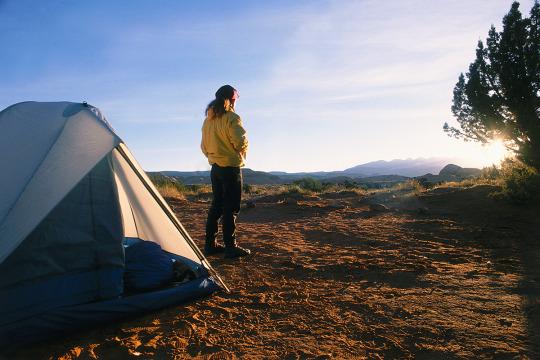 If you’re looking to get away from it all, look no further. (Photo: Getty Images)

With a population of just over two million, there are plenty opportunities to escape from not only the crowds, but from everyone. As in Colorado, the population centers along the interstates. I-25 runs north and south, with I-40 crossing the state east and west. Beyond those highways, expect solitude and rugged beauty. Campgrounds on the eastern edge of the Rockies are the busiest, hosting a sizable chunk of the state’s 7 million overnight visitors annually. For genuine peace and quiet, you have to out maneuver the Texas crowds that consider Red River, Taos, Raton, and Ruidoso their playgrounds. Head west of I-25, and you effectively leave the crowds behind.

While much of New Mexico is desert, the Rio Grande Valley is surprising green and lush. (Photo: Jeff Kubina/Flickr)

New Mexico has its share of mountains, but only 2 top 13,000 feet in elevation. Between the mountainous areas expect mostly desert. The exception is the lush Rio Grande Valley where farmers use the river for irrigating crops like tomatoes, green chilies, and grapes for the wineries. 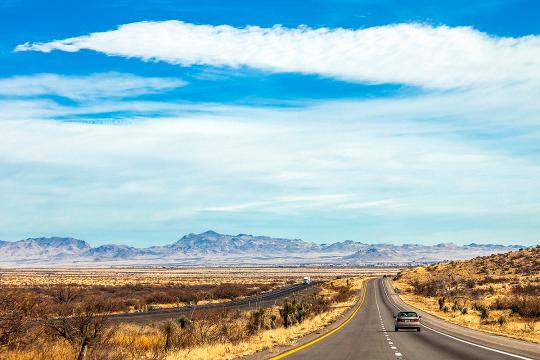 Be sure to make safety a priority when driving around the desolate New Mexico landscape. (Photo: iStock)

The solitude of the state makes trip planning crucial. Have a vehicle you can trust, carry extra water with you everywhere, and file a trip plan with someone if your adventure takes you off the main highways. As with Colorado, believe any indication that a road is only accessible with four-wheel drive. Cell service can be spotty away from the interstates so don’t plan to rely on your phone’s map app to get you where you want to go. Use GPS or go low-tech with a paper map. A detailed atlas is even better. 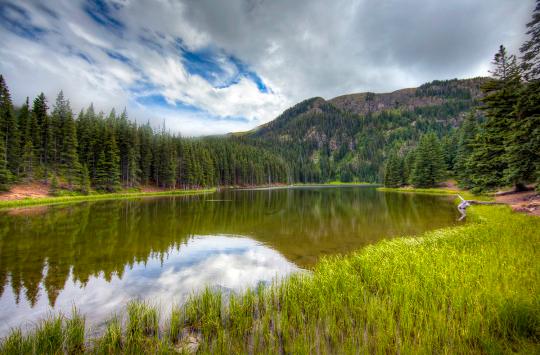 National forest campgrounds in New Mexico offer opportunities to experience everything from the art and culture of Santa Fe and Taos, to the backcountry of the wild and largely deserted Gila National Forest in the southwestern part of the state. There are five national forests in the state, covering roughly 7 million acres. Expect moderately spaced campsites with limited development that usually includes a table and fire ring. Water is frequently from a faucet shared by other camper. Toilets generally are non-flushing. Reservations are possible at the most popular parks through Reserve America. 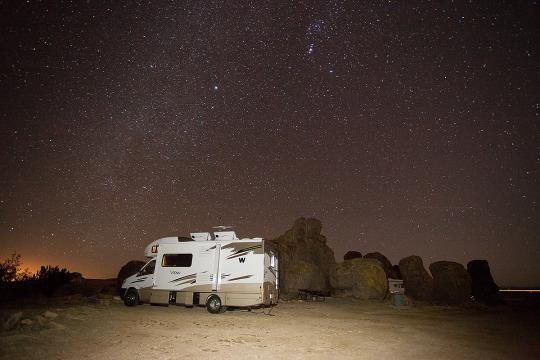 Spend a night under the stars at City of Rocks State Park. (Photo: Duncan Rawlinson/Flickr)

Upgrade your camping experience in New Mexico with a campsite at one of eighteen state parks. Sites generally offer more extensive development, including shelters and electricity. State parks are the best and often only way to experience many of the state’s lakes. The parks operate boating facilities, in addition to the standard camping, hiking, and wildlife watching facilities. Reservations are recommended. 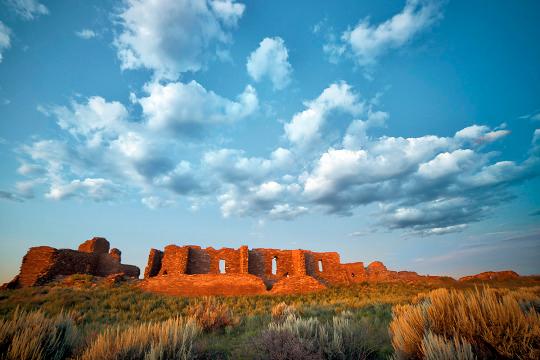 The National Park Service operates thirteen facilities in the state, but only two with campgrounds. Chaco Culture National Historical Park and Bandelier National Monument give visitors the opportunity to experience the ruins and petroglyphs of ancient people who once inhabited the state. Camping is limited and reservations are recommended. Many of the other NPS facilities like Carlsbad Caverns and White Sands National Monument have either private or forest service campgrounds nearby. 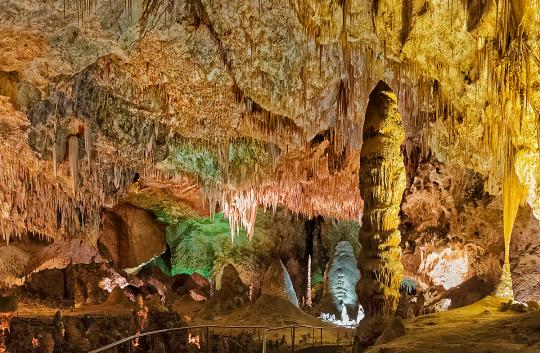 If you want a front row seat to the incredible Carlsbad Caverns, you can stay at the Carlsbad KOA. (Photo: John Fowler/Flickr)

RV parks in the state tend to follow the flow of population and pass-through travelers, but include some very nice alternatives to public parks. In some cases, private campsites are the only choices near attractions like Carlsbad Caverns that lack public camps. New Mexico has numerous KOA parks that offer widely spaced campsites and amenities like hot showers and laundry facilities. 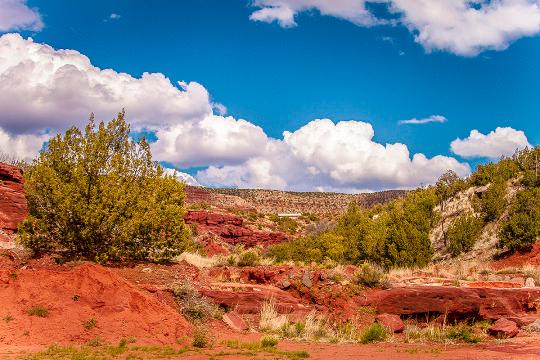 My favorite area of New Mexico is west of Santa Fe where the crowds rarely encroach. I am particularly fond of the Jemez Springs area. I grew up hiking these hills and eating fry bread from the reservation and would rather camp at Paliza Campground than almost any place on the planet.

WATCH: Heaven on Earth: The Hidden Oasis of the Arabian Desert