What I Learned from My First (Blunder-Filled) Marathon

By
The Active Times Staff
'Did it change my life? No. Did it make me a better runner? Yes. Was it worth the hurt? Definitely.'

Greatist Journeys explore amazing stories from extraordinary people. This guest post was written by Jason Shen, co-founder of Ridejoy. The views and opinions expressed herein are his. For more from Jason, follow his blog, The Art of Ass-Kicking.

Jason Shen—After many months of training, I ran my first marathon in the summer of 2012. It was agonizingly hard, and I made a lot of mistakes both in training and in the race—but I made it to the finish line. Did it change my life? No. Did it make me a better runner? Yes. Was it worth the hurt? Definitely.

This is how I prepared for and completed that 26.2 mile race. Hopefully my experience and mistakes can help your own journey to completing that first marathon.

Deciding to Run
After graduating from college and finishing an NCAA career in men’s gymnastics, I spent a few unsatisfying years lifting weights to stay in shape. On a whim, I tried running in a pair of Vibram Five-Fingers (those minimalist shoes) and loved how they felt. I had hated doing any kind of running as a gymnast, but (despite a past major knee injury that had required numerous surgeries), the minimal footwear made running fun and basically pain-free.

My competitive career as a runner began in July 2011, when I ran in the San Francisco Marathon's 5K. The adrenaline rush from that first 5K was thrilling, and got me rehooked on being a competitive athlete. In the months following, I ran more 5Ks, a few 10Ks, and even some half marathons.

Around the winter holidays, I thought to myself, "It'd be pretty awesome if I came back to next year's SF Marathon and did the full distance. Seven months should be plenty of time to train." For whatever reason, I felt that finishing a marathon would officially make me a “real” runner. Before I knew it, I had an SF Marathon registration email sitting in my inbox, and there was no going back.

Training for the Race 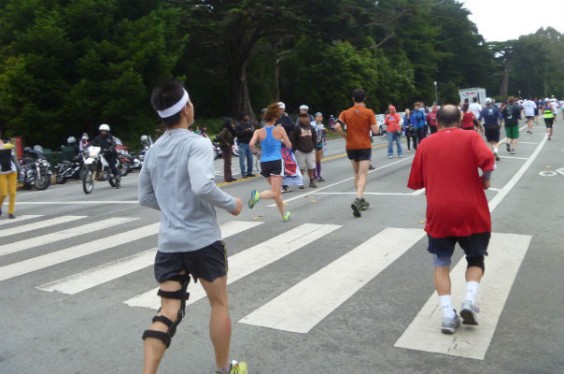 The marathon distance was daunting, but I knew from my years as a gymnast that with the right training, the seemingly impossible becomes possible. I looked at several well-known marathon training plans, but they generally required running 5 or more times a week, and I wanted a plan with lower mileage in order to protect my knee. I ultimately turned to running blogger and coach Jason Fitzgerald to devise a custom plan for me.

I ran about three times a week: One easy run, one longer run with a few miles at a faster “tempo” pace, and a slow long run on the weekend. I lifted weights, used the elliptical, or performed bodyweight exercises on two other days, and rested the other two days.

Every run began with specific warm-up and cool-down exercises to enhance performance and protect against injury. It’s a bit wild to find yourself running more than two hours at a time in training, but that’s what it takes to run 26 miles in a row. I passed the time (and agony) with long electronic dance music mixes or with chatty running partners.

My training plan called for 18-, 19-, and 20- mile long runs in the weeks leading up to the marathon, but, unfortunately, I wasn't quite able to pull it off. A mix of traveling, New York City heat, and a brief bout with the flu meant my last few long runs were either shorter than expected, split up throughout a day, or missed altogether. 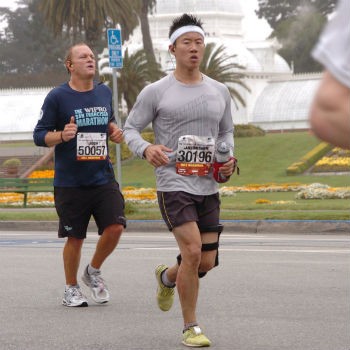 Despite these deviations from training, I was still pretty confident that adrenaline, additional sleep, and carb-loading would cover the gap and propel me to the finish line. From the scattered reading I had done on marathon times, I arbitrarily picked the target of running sub-4 hours as my goal, which required me to run just over nine minutes per mile for the whole race. To be perfectly honest, I just wanted the number “3” in front of my time (in retrospect, not a recommended way to pick a goal time).

The day before the race, I chatted with a former coworker who encouraged me to avoid going out too hard, which echoed the advice I've read about marathons from other runners and marathon race reports. We agreed that the best strategy would be to start with the 4:10 pace group and around halfway, if I felt good, pick up the pace.

Finally, race day arrived. I headed down to the Embarcadero, the famous waterfront in San Francisco, with my father (who had flown in to see me race). Due to there being thousands of competitors, the race started in waves. I had registered in Wave 3, which only featured a 3:50 pace group. To run with the 4:10 race group, I'd have to move to Wave 4, which was slated to start 10 minutes later.

In an epic lapse in reasoning, I decided it would be better to deviate from my race plan and start with the 3:50 group. "After all," I figured, "If I get too tired, I can just slow down in the second half and still have a buffer to hit sub four hours. And besides, if I start 10 minutes later, my Dad and my girlfriend will be left waiting at the finish line, wondering where I am." Like I said, poor judgement.

I should have recognized right away that an 8:50 minute per mile pace was too fast, but like a total amateur, I hung in there for three miles before recognizing the futility of staying with the pace group. I slowed to around a 9:30 minute-per-mile pace and let the rest of the group pull ahead as we neared the ramp toward the Golden Gate Bridge. 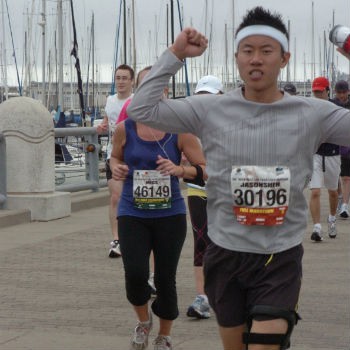 Running on the bridge was exciting, despite the crowd, fog, and chill. Watching people's expressions and outfits from the opposite lane was fun, and I even had a short conversation with a guy asking about the brand of my knee brace.

After reaching the other side of the bridge and coming back, we headed into a downhill where I pushed harder to try to gain some speed. I did catch up to some runners who had passed me, but my quads took a beating as well. After eating my second energy gel, my stomach felt a little queasy (I’ve realized now that certain flavors affect my stomach more than others). Thankfully a port-a-potty emerged to save the day. After a quick stop, I continued onward toward Golden Gate Park.

My time at 13 miles was 2:05, and as the 1st half marathoners peeled off, I saw a friend who was walking toward the 2nd half-marathon starting line. She called out to me, "Jason you look great!" I beamed and felt like maybe there was a chance I could actually hit my goal.

The moment was brief. At mile 14, the distance caught up to me. I realized how much my legs hurt and how badly I wanted to walk. I had been running nearly continuously up until then, minus a few steep hill climbs, and I knew I couldn't give in right then and there, especially with all the miles left. I promised myself I would get to walk only after crossing mile 16. 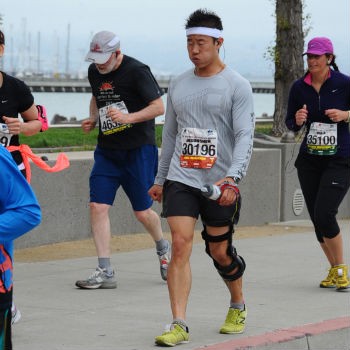 Those next two miles were awful. I'm ashamed to say I didn't even make it to 16 miles, succumbing to a walk literally 100 yards before the official mile marker. It felt incredible to walk, but after “breaking the seal” as it were, I couldn’t go back to continuous running. It wasn’t due to a lack of energy, but simply the fact that my entire lower body was aching from the repeated pounding.

I spent the next 2.5 hours walking at every mile marker until the pain subsided somewhat, then shuffling into a slow jog until the next mile marker. I sat down at one point for maybe five minutes.

The rule I made for myself was that once I started running, I had to keep going till the next mile—and I repeated this for 10 miles. While dreadful, this system was simple and helped me not give up entirely. Hundreds if not thousands of runners passed me, and in the photos I look completely ragged.

I was able to pick up the pace just a bit in the last mile and, around 10:30am, 4 hours and 53 minutes after I began, I crossed the finish line of the San Francisco Marathon. I was finally a “real” runner.

Recovery and Reflection
The rest of the day was a blur. Someone put a medal around my neck, I found my Dad and girlfriend, sucked down a bunch of Jamba Juice, talked a bit, trudged home, and collapsed in my bed for a mega nap.

In the days and weeks afterward, I felt a strong sense of disappointment in myself, despite the encouragement from friends and family. I kept reviewing all the mistakes I made: I should have trained harder and more consistently. I should have have gotten more sleep. I shouldn’t have gone out so fast and pursued an ill-chosen goal time.

I didn’t run much for a while, partly to let my body take a break, but partly out of a lack of motivation. But eventually, while out in the middle of the Nevada desert at Burning Man, I ran a 5K. It was a blast—and helped me rediscover the joy of running.

Running, I've learned, is such a versatile activity: It keeps you fit, helps you get places, lets you socialize, offers an outlet to blow off steam, and, yes, is a way to channel a competitive nature.

While my first marathon wasn’t everything I’d hoped it to be, I’m still so grateful to have running in my life. And, perhaps more than finishing 26.2 miles, this gratitude is what truly marks my passage into the halls of “real runners.”

I’m definitely eyeing a rematch with the San Francisco Marathon, armed with a better training and racing game plan. And in the meantime, I’ll keep putting on my shoes, plugging in my earbuds, and hitting the road. Because part of being a real runner means running just for the hell of it.

Have you ever run a marathon? Did you have a better experience than Jason? Tell us in the comments below or tweet the author at @JasonShen.

More Reading:
The Slowest Marathon. Ever.
How Long Should You Recover After a Marathon?
Setting—and Achieving—Your Marathon Goal Time