What Every Runner Should Do Before Race Day

Jenni Whalen—When the gun goes off at the 2015 Boston Marathon on Monday, it will be Chris Troyanos’ 39th year as medical coordinator for one of the world's most famous footraces. But after almost four decades, the seriously massive scale of the medical operations—10 hospitals, 15 portable blood analyses systems, 28 tents, 300 beds, 300 pounds of ice, 700 IVs, 1,600 volunteers, and more than 30,000 runners—doesn't faze him.

In Troyanos’ role as medical coordinator for the Boston Athletic Association (BAA), the certified athletic trainer and sports medicine consultant is behind almost every medical detail of the city’s most prominent races, from 5Ks to 10Ks to the marathon. From managing the aftermath of the 2013 bombing to saving the life of a runner in cardiac arrest, Troyanos has seen more race-day drama than most runners or medics ever will.

On the second anniversary of the Boston Marathon bombing, Troyanos can still vividly remember most of the details of that day. When the bombs exploded at the finish line, his medical team was literally already on the scene. “What happened wasn’t exotic,” Troyanos says. “We did basic first aid on about 97 people. We stopped bleeding. We got them to the hospital.”

He may be humble, but there's a valuable lesson he learned that day: Always be prepared. Fortunately, planning to treat 30,000 people—10 percent of whom are likely to come into a medical tent for anything from a bandaid to an IV—meant that when the bombs went off, his seamless protocols streamlined emergency management.

Because he was so well-prepared, Troyanos hasn’t changed much about the race’s organization since the events of 2013. What is different, he says, is the passion behind the event. After the bombing, the Boston Marathon became more than just a race, he explains. Today, it represents resilience, community, and closure.

In honor of the second anniversary of the bombing, we talked to Troyanos about what he’s learned as athletic trainer (and literal life-saver) to hundreds of thousands of runners. These top tips from under the medical tent are useful to any race runner. 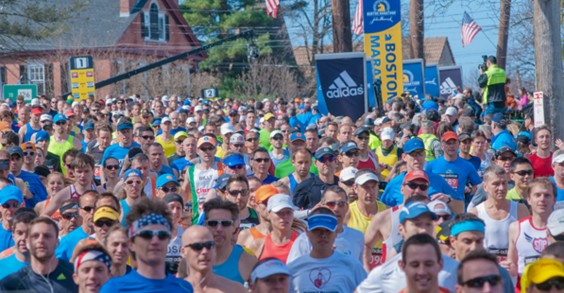 1. Get Cleared
First things first: Visit your primary care physician several months before any big race. “Make sure you are physically able to handle this kind of stress,” Troyanos says. Also know your family’s medical history before you sign up. Coronary disease and other medical issues can crop up when your body is under intense pressure—such as running a grueling 26.2-mile course.

2. Clock the Miles—No Matter What
You (hopefully) know it's not wise to go from watching Netflix marathons to running a marathon, but Troyanos says that he consistently sees people attempting to finish the course after only having run 10 miles, tops. Find a reputable training plan (Hal Higdon and Runner's World offer good options), and follow it.

If you're training during the winter, prepare for weather that may affect your training, like the Snowpocalypse of 2015. Rather than skipping a training day (or five) because of snowy roads, log the miles on an indoor track, the elliptical, or in the pool, Troyanos says. Running in the snow can be doable too, as long as you have shoes or traction cleats that can grip the icy terrain.

3. Know the Course
You may have heard of Heartbreak Hill—the part of the Boston Marathon course that’s infamous for being one of the toughest, steepest hills a runner will ever experience. However, that’s not the biggest problem: It’s the 17 miles of downhill before Heartbreak Hill that really messes with runners’ minds, Troyanos says.

Basically, an unexpected downhill is like false hope for runners in terms of how their body feels. They run faster than their planned pace because they're moving downhill and it feels easy. However,running faster than planned uses up more energy so they don't have as much gas in their tank to then make it up Heartbreak Hill without pain.

Holding back just a little bit on the downhill—even when you feel powerful and like you have energy to spare—can work in your favor because when you get to the incline, you'll feel almost rested. The best way to prep for this is to look at the course map so you know when downhills are coming, Troyanos says. That way, you can save energy for the tough spots, like those final three miles.

4. Check the Weather
Troyanos notes that while parts of the Boston Marathon course can expose runners to warmer weather, they may also catch a chilly sea breeze at mile 22. This temperature variation is common on most courses, but it can add unexpected resistance in addition to changing your body temperature more quickly than you’d planned on, Troyanos says. Check the weather before you run, and dress for varying temps (you can shed layers along the way). 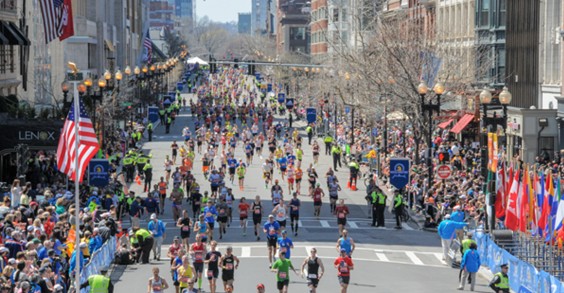 5. Watch Out for Others
Several years ago, a 62-year-old runner from Louisiana suddenly dropped to the ground at mile 24 in cardiac arrest. Troyanos, who serves as a sort of command central for emergencies, received a call from volunteers and contacted the Boston EMS, but it still took them several minutes to arrive. Luckily, several physicians from a nearby fundraising tent hopped the fence to give the man CPR, saving his life.

After that, Troyanos realized runners make the best first responders. He's started to train Boston Marathon runners and volunteers to “fill the gap,” offering CPR and assistance to other runners on the course until the EMS arrives. Even if you aren’t CPR-certified, Troyanos recommends keeping an eye out for people who are struggling on the course. Sure, it may add a few minutes to your race time, but staying alert and ready to assist others could also save a life.

6. Stay Cool
Training during winter weather can also make a marathon far more difficult to complete on a warmer race day. “It hasn’t been warm in New England,” Troyanos says (understatement of the year!). “So if we get a 60- or 65-degree day on race day this year, it’s going to feel really hot.”

Troyanos has worked with runners who experience body temperatures of over 105 degrees on race day—some have even hit 109! To avoid this, runners should watch for muscle cramps, stomach cramps, and clammy skin. If you start feeling those symptoms while on the course, head to a medical tent ASAP, where they’ll have 300 pounds of ice ready and waiting.

7. Hydrate (But Not Too Much)
“Runners constantly ask me about the appropriate amount of fluids, but it’s not one-size-fits-all,” Troyanos says. Obviously, it’s important to hydrate before and after a race, and watch out for dry mouth, headache, and dizziness, which can be signs of dehydration. But while Troyanos can easily aid dehydrated runners with IVs, he also sees cases of over-drinking (called hyponatremia), which can be much more difficult to treat. Hyponatremia feels somewhat like dehydration (headaches, nausea, confusion, or weakness are all signs), but if you give an over-hydrated individual an IV, you could kill them, Troyanos says. Instead, Troyanos’ volunteers use portable iSTAT machines to measure the sodium levels in just one drop of blood and to determine the correct treatment plan.

Pay attention to your body on race day and try to drink the same amount of fluids you drank during training, Troyanos says. Excessive mouth dryness, a pounding head, or an upset stomach are all signs that you may need to stop at the nearest medical tent for help.

8. Think About the Bigger Picture
If you’ve trained and prepared for the big day, you should feel confident in your abilities. And if you need that extra push, look for an external motivator that can help drive you across the finish line, Troyanos says. Running for a charitable cause or in memory of a loved one are common personal touchstones that runners can come back to when the going gets tough.

And undoubtedly, this year many Boston runners will be thinking about the events that happened two years ago, which can provide the motivation they need to reach the finish line. “Last year, 97 percent of people who started the marathon finished,” Troyanos says. “We treated people who said ‘I’m still finishing, no matter what.’ They needed closure. And it was important for us to send a message to the world.”

More Reading:
4 Simple Ways to Improve Your Posture While Running
How Racing for a Cause Can Actually Make a Difference
Spinning for Runners: 4 Reasons It’s The Best Type of Cross Training