By
The Active Times Staff
Indoor Cycling for Beginners: Know Before You Go

Claire Maldarelli—We know cycling is a great workout, but let’s be real—no one wants to go out and ride a bike in pouring rain, freezing weather, or on a scorching summer day. Rocking out to T. Swift and Tiesto in a darkened room with a motivating coach? Now that's more our style.

While indoor cycling has been around since the early 1990s, the fitness phenomenon is still going strong. Most gym chains now offer classes and thousands of boutique cycling studios are opening around the world. (You've probably heard it called "spinning," but that term is actually trademarked by Mad Dogg Athletics to identify the company's particular type instruction and bike models. Other classes are technically called "indoor cycling.")

No matter the name, one thing is for sure: It's a highly effective cardio and strength workout. In one 45-minute class, you’ll ride a stationary bike to the beat of awesome music—and burn up to 600 calories in the process. Not only will your lungs be pumping, you'll also work your glutes, calves, quads, hamstrings, and core. Studies show that over time, indoor cycling can decrease body fat and body mass index, and improve overall cardiovascular function .

Indoor cycling is definitely intense and fast-paced, but it’s a great sport for any fitness level. Unlike running, cycling is low-impact, and because you determine how hard you work and your bike's resistance, pulling or straining a muscle is highly unlikely, says Ryan Makely, a master instructor at Flywheel in New York City.

However, we know that the first class can be super intimidating. From adjusting the seat height to clipping into (and out of) the pedals to simply keeping up with the music, your first time indoor cycling can seem trickier than whipping up a five-course meal. So we went to the experts to compile all the pointers you need to know to make your first ride a smooth—and sweaty—success. 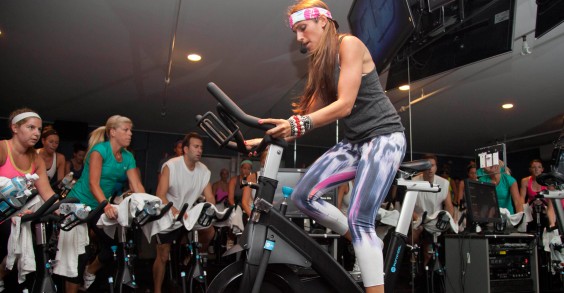 1. Pick a Seat, Any Seat
Most cycling studios and gyms allow riders to reserve a bike online before class, so go ahead and choose a spot that makes you feel most comfortable. Newbies shouldn’t be afraid of the front row, says Marion Roaman, the general manager and master instructor atPeloton Cycle in New York City. In fact, sitting in the front gives you a better view of how the instructor is moving and may also motivate you to work harder.

Many studios (like Flywheel) have tiered seating, so people who sit in the back get a 360-degree view of other riders , which can be a good strategy to take it all in, Makely says. Either way, choosing a seat beforehand is a great way to take control of your ride before it starts.

2. Dress for Success
Throw on a moisture-wicking shirt or tank top to stay cool. Three-quarter-length tights are also a good choice—avoid shorts or baggy sweats—or go for comfort with padded bike shorts. “While they're not the most attractive, they are super effective, especially if you happen to be particularly sensitive,” Roaman says.

When it comes to kicks, most boutique studios have pedals made for special clip-in bike shoes, and they usually offer them when you purchase a class for free or a small additional fee, says Jenny LaVelle, a certified cycling instructor in New York City. If they don’t, any type of running or athletic shoe works fine and can be strapped into the pedals.

3. Customize Your Ride
Just a few small adjustments to your bike can make all the difference in your ride. A simple trick to determine the best seat height: Stand next to your bike and bring the seat to hip height. Then, once you're on the bike, your leg should be bent at a 25- to 30-degree angle at the bottom of the pedal stroke, Makely says. When you pedal, your knees should be aligned over your toes (as if you were in a squat).

Finally, adjust the handlebar height so it feels comfortable.The lower the handlebars, the more strain you put on your lower back, so if you have back, neck, or shoulder pain, make it a little higher and scoot the seat forward. 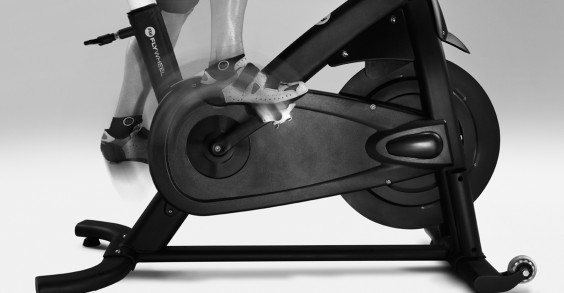 4. Clip In (and Out)
Despite the intense, sweaty workout in between, clipping into and out of the bike can be the hardest part of a cycling class. If you're in regular sneakers, place the ball of your foot in the cage directly in the middle of the pedal, LaVelle says, making sure not to shove your toes all the way to the front of the cages.

If you are wearing cycling shoes, clip in one foot at a time: Tilt your toes at a downward angle on top of the pedal and then push your foot down until you feel the shoe lock in. “It’s the same motion as clipping into skis,” Makely explains.

When you’re finished, stay seated on the bike and take one pedal to the bottom of the stroke at a time. Use some force turn your ankle away from the bike until each shoe unclips. If you can’t unclip, don’t panic! Just take your feet out of the shoes, Roaman says. After enough classes, you’ll get the hang of it.

5. Know the Lingo
Unlike a road bike, indoor cycling bikes don't have gears. Instead, a resistance knob controls how hard the muscles need to work to increase revolutions per minute (RPM), which is the typical measure of cadence, or how fast you're going. Think about resistance as a road: If you were riding outside and going up a hill, that hill is your resistance.

During class, the instructor gives you resistance numbers to match or tell you if you should feel like you're slowly climbing up a hill or riding faster on flat road, LaVelle says. Increasing or decreasing your resistance knob will help you get to the right place. Some classes, like the ones at Flywheel, provide technology on the bike that tells you exactly what level resistance you're riding at.

While everyone should adjust the resistance according to his or her comfort level, Makely suggests staying within a two-point range of what the instructor suggests. But if it feels like your lungs are going to explode or your legs are as heavy as lead, feel free to take it down a notch.

6. Focus on Pulling Up
"Most beginners focus way too much on pushing down," Roaman says. "But the upstroke is really what provides all the power." Concentrating on pulling up with each pedal stroke will increase momentum and make it easier to increase RPMs. And here's a bonus for clip-in shoes: When you’re actually clipped into the bike, you can focus less on keeping your feet in place and more on your stroke, Roaman says.

And don't forget about your core: While seated or hovering over the saddle, use your abs as much as possible to help support your lower back, LaVelle says. Try to keep your back straight (it's OK if there's a slight curve when you're out of the saddle). 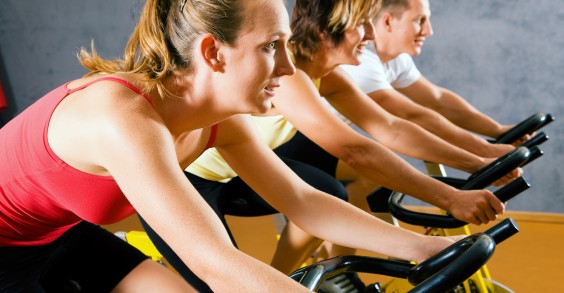 7. You Do You
Walking into your first cycling class can be intimidating—especially when it seems like everyone around you is already a pro. But once the lights turn down, the music turns up, and the class starts, remember it’s all about you, Makely says. The riders around you are focused on themselves.

That's the beauty of indoor cycling: No one is going to bother you. Indoor cycling classes directly connect the rhythm of the music with the pace of the exercise, so if it becomes too much, just close your eyes, pedal, and get lost in the music, Roaman says. Choose a class and an instructor that plays music you enjoy—and remember to embrace the beat!

♦ Most studios and gym provide towels (and if not, bring one!). Lay the towel over the handlebars—your sweaty self is going to want it 10 minutes into class.

♦ If you arrive more than 5 minutes late, you likely won’t be allowed in the class. Get there with enough time to stash your stuff in the locker room and set up your bike properly.

♦ Eat a pre-workout snack about 90 minutes before the class. This will give you energy for the class, but will also give your body enough time to digest.

♦ Keep drinking water—before, during, and after! For a 40-minute class, your body will need at least 40 ounces of water after, LaVelle says.

♦ Some classes now incorporate a short upper-body routine using small free weights or bars, ranging from two to six pounds. Before you reach for the weights, add enough resistance so you can pedal while feeling stable sitting upright. 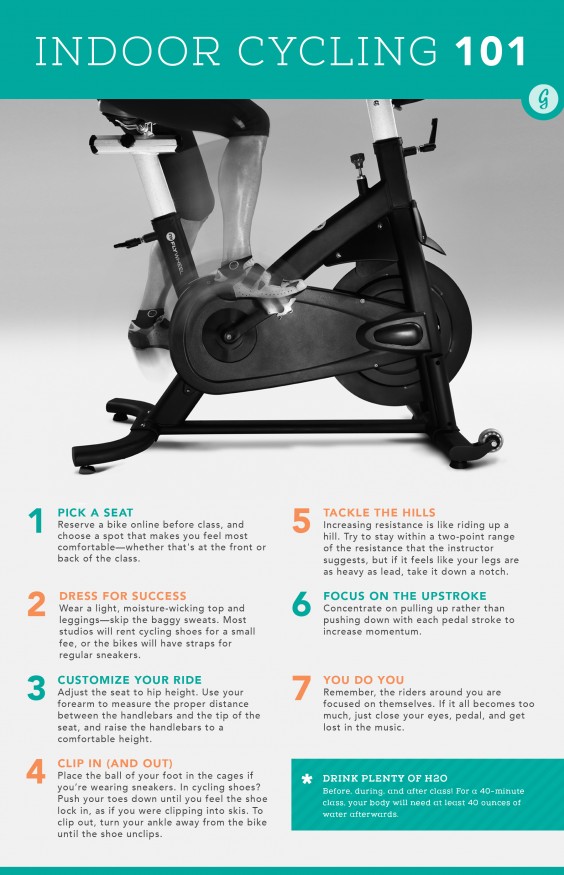 More Reading:
30-Minute Indoor Workouts that Anyone Can Make Time For
Yes, Your Desk Job Could Quite Literally Be Killing You
5 Cardio Workouts that Burn Major Calories and Blast Fat Fast