The Perfect Morning Workout if You're Not a Morning Person

When it comes to exercising in the a.m., it’s way easier to be a wimp than a warrior—which is bad news, considering how an early sweat session may benefit your body, not to mention your to-do list.

Not only are morning workouts easier to stick to(hey, impromptu happy hours don't happen before the sun comes up), but science also suggests that working out early—more specifically, before you’ve had breakfast—may help the body burn fat more efficiently . That said, actually getting yourself to the gym—or even out of the house—at the crack of dawn can feel like a one-way ticket to struggle city.

It’s no wonder, really, since your body’s still going to be in snooze mode at that hour, particularly if it’s not acclimated to doing something right away, says personal trainer Stacy Berman, founder of Stacy’s Bootcamp in New York City. But that doesn’t mean you have to give up on all your #RiseAndGrind aspirations altogether—just opt for a calmer kind of workout at the beginning.

Your Plan of Action: Rise and Energize

Start with gentle movements that yield big results—ones that strengthen and stretch the entire body while getting the blood pumping but are a bit less intense, Berman suggests. Consider her workout below your entry into the morning-person club.

For details on how to perform each exercise, scroll down below the graphic. 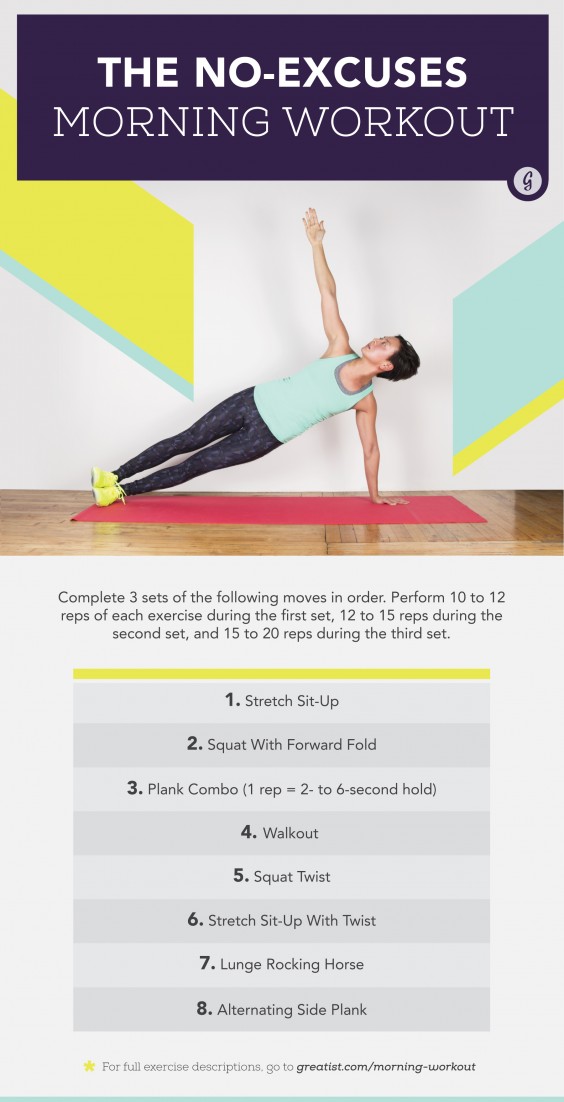 Complete 3 rounds of the following circuit. Perform 10 to 12 reps of each move in the first set, 12 to 15 reps in the second set, and 15 to 20 reps in the third set. By the end, you’ll feel stretched, energized, and ready to take on the day.

To slowly activate the core muscles (without stressing them out), try this move, Berman says. Lie on the floor with legs together and straight out in front of you and arms extended on the floor overhead. Stretch arms up, engaging core as you sit up, and then try to touch your toes once you’ve reached a full bend in hips. Return to start.

This move pulls double duty: It strengthens the legs, but also stretches your hammies. To start, stand with feet slightly wider than shoulder width. Lower into a squat. Instead of returning to stand, straighten legs and fold forward, reaching hands toward the ground. Return to squat position and continue alternating between the squat and the forward fold.

“This is a gentle way to get the blood flowing to the core and works both the upper body and the core,” Berman says. Begin in a modified plank position, with hands and knees on the ground, keeping shoulders, knees, and hips in one straight line. Place toes on the floor, and then lift knees off the ground to go into full plank position. Hold for 2 seconds in the first set (increasing to 4 seconds in the second and 6 in the third). Return to modified plank. That’s one rep.

Also known at the inchworm, this move strengthens the core and the upper body. Stand tall with feet slightly wider than shoulder width, and then lower into a squat. Place hands on the floor in front of you and walk them out until you’re in push-up position. Walk hands back toward feet and return to standing. To make it harder, perform a push-up before walking hands back toward feet.

This move targets your lower body, but also incorporates a twisting motion to work your obliques and upper body—especially if you add a weight to the mix. Stand with feet slightly wider than shoulder width, toes pointing forward. Without moving left foot, rotate torso to the left, lifting right heel off the ground and twisting right foot to the left as you do. At the same time, extend arms up to the ceiling to your left. Rotate body back to center, and then lower into a squat. As you do, bring arms down until they cross over your right foot and hover above the ground. Return to start.

To make it harder, hold a medicine ball or weight (a heavy book or laundry detergent would work too), during the movement.

To get your obliques in on the action, separate legs until they form an upside-down V. Go through the same movement you did during the stretch sit-up, but instead of reaching hands toward the middle, twist torso to the right as you reach hands to the right foot. Return to start, and then repeat on the other side. Return to start. That’s one rep.

This move strengthens the lower body while also stretching the hamstrings and calves. “Plus, the added benefit is the opportunity to stretch the hip flexor,” Berman says. Begin by lunging forward with left leg in front, left knee bent 90 degrees, toes pointing forward. Straighten left knee as you dive upper body forward until you can place your fingertips on the ground (or as close to possible), framing left leg between your hands. Return to the starting position, and repeat on the other side. That's one rep.

If you’ve ever taken a yoga class, you’re probably familiar with this move—the total-body-blaster known as the side plank. Begin in standard plank position, pulling legs together so that heels touch. (Widen legs to make this move easier.) Rotate torso to the left, lifting left arm off the floor and extending it straight up toward the ceiling, stacking shoulders in one line as you do. Return to start, and then repeat on the other side. That's one rep.