Will Eating at Night Make You Gain Weight?

Forget the boogeyman—eating directly before bedtime can cause nightmares too, and these feature expanding waistlines. Studies have suggested a range of connections between late-night eating and weight gain, but does consuming calories after sunset really lead to a bigger gut?

The Midnight Munchies—Why It Matters 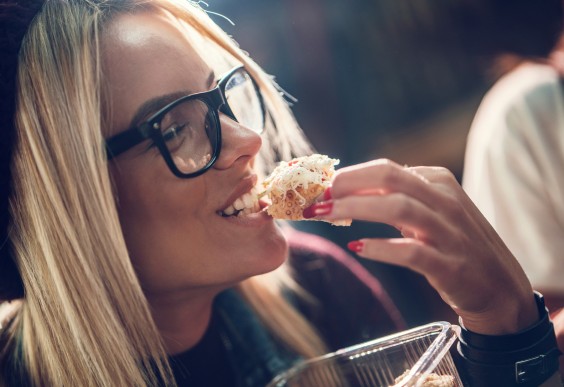 Eating before bed has long been touted as a cardinal sin of weight loss, leading some weight-conscious individuals to forgo any food after 8 p.m. One study with more than 400 participants found that nocturnal snacking was associated with higher body mass index (aka BMI).  Several others determined that eating food when a body should be at rest can be detrimental. One study found that mice—our smaller, furrier, nocturnal friends—gained significantly more weight when fed during the day, when they'd normally be asleep. The results were a loose proxy for what can happen when humans eat a bunch of calories at night (when we'd normally be asleep).  When the mice followed a time-controlled diet (not just eating whenever)—the risk of metabolic diseases decreased.

We're not mice, but sometimes we don't act much differently: "It's important to realize that nighttime eaters tend to skip breakfast, which ends up in a vicious cycle where the person is hungrier and more likely to overeat later in the day, and then not hungry for breakfast again," says Greatist Expert Sherry Pagoto, Ph.D, a clinical psychologist and expert in behavioral counseling for obesity. If the same total number of calories are consumed each day, it doesn't matter how they're distributed. But eating later in the day may be directly related to eating too little earlier in the day, and it's that pattern that leads to overconsumption. So nighttime snackers should be sure they are having an adequate breakfast and lunch, Pagoto says. If they aren’t, it may be why they're getting hungry so late.

But other studies seem to contradict the notion that nighttime binges lead to expanding waistlines, at least in primates. A study on monkeys found those consuming the majority of their calories later at night were no more likely to gain weight than their day-eating companions. So is eating at night actually monkey business? 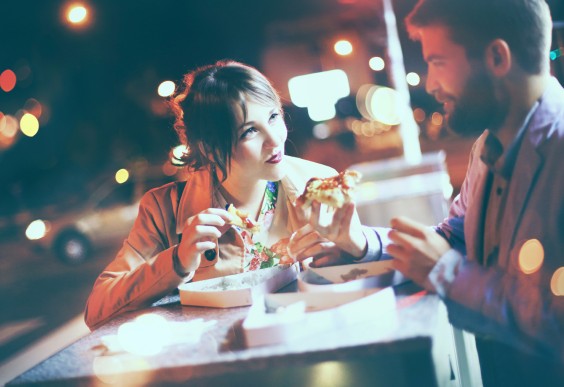 While evening calories may not be the main culprit, other influences might be at work. "Since the appetite-regulating hormone ghrelin is better regulated in the morning, it is easier to prevent overeating during the day versus at night," says Greatist Expert Lisa Moskovitz, R.D., C.D.N. This means that the body's ability to feel full is much stronger in the morning, so we stop eating sooner. But if you exercise at night or work late hours, don't feel like you can't eat—Moskovitz says calorie intake/burn is still the most important thing for managing weight.

But keep in mind that those who eat most of their calories after 8 p.m. may experience poor sleep quality following their binge sessions (and poor sleep is associated with future weight gain and obesity).   Finally, a reason for an afternoon nap! Apart from interrupting snore—err, we mean sleep—cycles, late-night eaters tend to munch onhigh-calorie snacks and often end up exceeding their recommended daily caloric intake. In addition, nighttime snacking tends to take place in front of the TV, where overeating is all too easy.

Eating directly before bed may lead to weight gain, but researchers haven't pinpointed the exact culprit. Sleep and calorie source seem to be the two main villains. It turns out our bodies are generally better able to metabolize food at certain times of day (read: not nighttime). Studies indicate that late-night calories impact sleep cycles, throwing off normal body rhythm and packing on the pounds.

Focus on improving sleep quality by avoiding high-sugar foods directly before bed and kicking the late-night TV habit for a book. (Or at least ditch the TV-time snack…) Have a hankering for sugar? It's easy to reach for high-sugar, high-fat foods to curb cravings late at night, which can cause calorie intake to skyrocket, mainly due to decreased activity and more couch time. If that bedtime snack is a necessity, reach for healthier options(think low-fat dairy products, low-sugar fruit, and veggies) and pass up the frozen bagel bites in favor of something self-prepared.

Overall, it's better to focus on how often you eat and exactly what you're eating. To support healthy metabolism and digestion and manage energy and weight, it's typically best to eat every three or four hours, have breakfast within one or two hours of waking, and stop eating one or two hours before bedtime. Try to steer clear of sugary snacks late at night (cramming for an exam? They're probably also not helping). And always include some lean protein and fiber-rich complex carbs with every meal and snack.