Ask any expert how to tell if a food is healthy, and you'll likely hear: “Just read the label!” It may sound simple, but that doesn’t mean it’s easy.

Nutrition labels and ingredient lists are dizzying displays of numbers and confusing (or downright unrecognizable) terms. So if you don’t know exactly what you’re looking for, attempting to make sense of them is pretty much on par with bumbling through your college chemistry textbook.

But it doesn’t have to be that way. Even though nutrition labels are chock-full of information, you really only need to pay attention to a few specific things to determine whether a food is actually good for you. Here’s what they are.

You’re probably used to looking at the big, bold number of calories first—or maybe it's the only thing you look at, period. And while the number definitely counts, where those calories come from might matter even more. “A healthy snack bar may have as many calories as a candy bar, but the sugar is lower and the fats are healthier, and it provides protein and fiber,” says Rania Batayneh, MPH, nutritionist and author of The One One One Diet.

Still, you don’t want to go crazy. The right number will depend on your individual calorie needs and the type of food you’re looking at (the calorie limit for a frozen entrée, for instance, would be different than the calorie limit for a breakfast cereal). The big exception? Snack foods—like energy bars, trail mix, or whole-grain crackers. Taking in too many calories between meals is an easy way go over your daily needs and gain weight, so make sure the label says your snack contains less than 200 calories per serving, says registered dietitian Lauren Harris-Pincus, MS, RDN, founder of Nutrition Starring YOU. 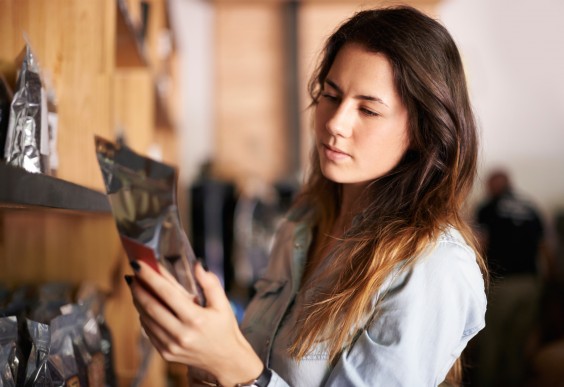 The naturally occurring sugars in some whole foods (like plain yogurt, milk, or fruit) are part of a healthy diet. If you look at the labels on these types of foods, the sugar grams may seem high. But usually, there’s no need to limit natural sugars unless they’re reallyhigh, like with some juices. "Because you’re removing all the fiber from the fruits, you’re essentially concentrating all the sugars into a bottle," Batayneh says. So be wary of even healthy-sounding juices, which can have more than 40 grams of natural sugar—way too much.

Then there are the added sugars, the kind that manufacturers add to foods to make them sweeter. How can you tell the difference between the two? Added sugars will be listed in the ingredients, while natural sugars aren't. They can go by dozens of names, but a few of the most common offenders are high fructose corn syrup or anything ending in “ose” (like glucose, fructose, sucrose, dextrose, and maltose). “Food manufacturers will use different types of sugars in their products, so the sugars appear lower on the ingredient list [since ingredients are listed in descending order of weight], which can trick consumers into thinking that a food doesn’t have that much sugar,” Batayneh says.

Oh, and natural sources of added sugar—like agave nectar, sucanat, molasses, maple syrup, evaporated cane juice, coconut sugar, or brown rice syrup—all count too! No matter where it comes from, added sugar contains the same number of calories, and too much can up your risk for obesity and diabetes, Batayneh says. As for artificial sweeteners? If they’re zero-calorie, they won’t be listed as part of the total sugar grams. (More on why you should steer clear later.)

Pick packaged items that contain as little added sugar as possible. Still, finding a cereal or snack bar with 0 grams of sugar might be unrealistic. Your goal: Aim for your food to contain fewer grams of sugar than fiber, recommends Harris-Pincus.

Instead of looking at the total fat, focus on the bad fats. Specifically, these two:

Consuming any amount of trans fat—the artificial fat made by adding hydrogen to vegetable oil—can up your risk for heart disease and type-2 diabetes, so the only acceptable amount on a nutrition label is 0 grams. And make sure the ingredients list is free of trans fat (usually called “partially hydrogenated oils”)—legally, a food is allowed to contain up to .5 grams of trans fat per serving and still list 0 grams on the nutrition panel. Which means that if you scarf down more than one serving, you’re getting more trans fats than you think, Harris-Pincus says.

In packaged foods, you want as little saturated fat as possible, says Harris-Pincus and Batayneh. While mounting evidence suggests that the stuff might not be as bad as we used to think, experts still recommend limiting your daily saturated fat to 10 percent of your total calories. And they should come primarily from whole, nutrient-dense foods like dairy, lean meats, nuts, and seeds—not crackers or snack bars.

The majority of Americans get way more sodium than the recommended 2,300 mg per day—and most of that excess comes from packaged foods. Keep the salt levels under control by making sure snack-type foods (like granola bars or pretzels) have less than 300 mg of sodium. For meals (like a frozen burrito or canned soup), keep it below 700 mg, Batayneh and Harris-Pincus recommend.

A decent amount of fiber means that your packaged food is more than just empty carbs in a shiny wrapper. Fiber slows digestion to help you stay fuller longer and stave off blood sugar spikes—so you’re less likely to crave junky snacks. But there’s no one amount for all packaged foods, says Pincus. (For instance, plain Greek yogurt has zero fiber, but that doesn’t mean it’s not good for you!) 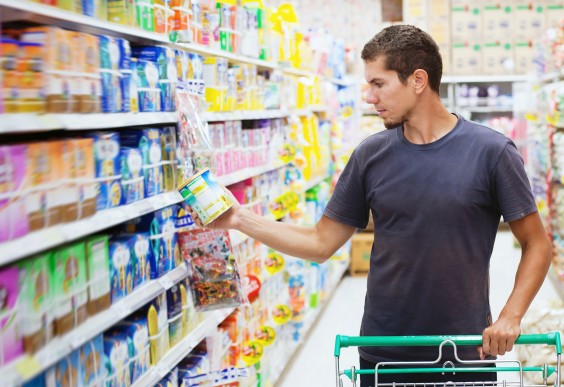 Protein is another factor that varies greatly depending on the person and their nutrient needs. And yes, there is such a thing as eating too much protein. While R.D.'s are hesistant to nail down a number for meals in general, look for snacks with five to 10 grams of protein, Harris-Pincus suggests, to help keep you satisfied.

Ideally, carbs should make up about 50 percent of your total caloric intake, Batayneh says. (If you're eating 2,000 calories per day, that's around 250 grams of carbs.) "Activity levels do play a role in determining your body’s needs, but it's all about balance and quality of your food choices," she says. "Not all carbs are created equal, but eliminating them completely can backfire." Here's more on why you should be eating them.

Even if the nutrition panel looks like it’s in good shape, check the ingredients list for funky additives. It’s smart to steer clear of any foods containing:

Usually, these are listed as red, blue, or yellow, followed by a number. They’re made from petroleum (not cool) and have been linked to cancer in animals (really not cool). Plus, does anyone actually need blue yogurt?

Namely, sucralose, aspartame, and acesulfame potassium, Harris-Pincus says. Artificial sweeteners are thought to have a negative impact on your gut bacteria, and some studies show their saccharine flavor could set you up to crave more sweet stuff.

15 Foods an Athlete Would Never Eat