Why Do I Sweat More Than Everyone Else?!

Locke Hughes—It’s halfway through the first plank series in barre class, and you’re sweating so much it looks like you just jumped in a pool—yet your friend is completely dry. Or maybe you're the type who can tear through a treadmill session and barely glisten. Either way, what gives?

First, let’s break down the science of sweat. “Sweating is a necessary process that cools down the body,” explains David M. Pariser, M.D., a dermatologist and founding member of the International Hyperhidrosis Society.

When your body starts to overheat, the nervous system stimulates sweat glands to release perspiration. As the droplets evaporate off of your skin, they take some body heat into the atmosphere. (Think about how chilly your skin is when still wet from the shower—as the water dries, it cools down your body. Sweat works the same way to cool you down as it evaporates.)

What sweating doesn't do is “detox” your body, Pariser says. ”More than 99 percent of sweat is water, along with trace amount of electrolytes like salt.” While a small amount of toxic substances can find their way out of the body through perspiration, detoxification primarily occurs in the liver, kidneys, and lungs—not through the skin.

How Much Is Too Much?

Just about any amount of sweat is considered normal. “There’s a lot of variability as to how much people sweat, and most of it is in a normal range,” Pariser explains. “Just like height, there’s an average when it comes sweat—and some people produce more and some produce less.”

If you’re constantly a little clammy, worry not. “Everyone sweats a baseline amount at all times,” Pariser says. And most people sweat more noticeably when exercising, in a hot place, or in a stressful, embarrassing, or uncomfortable situation. (Awkward first date, anyone?)

However, if you’re sweating a ton all the time, especially in certain body areas, it may indicate a medical condition called hyperhidrosis, which affects 2 percent of the U.S. population, Pariser says. One type, known as focal hyperhidrosis, may be genetic, and the sweating occurs only on specific body parts (usually the underarms, feet, hands, or face). The second type may be a side effect caused by another disease (such as diabetes, menopause, or hyperthyroidism) or certain medications. If you feel like you're suffering from excessive sweating, talk to a doctor to see if it could be hyperhidrosis. 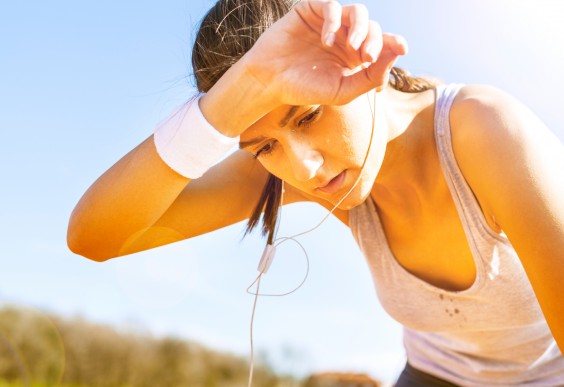 But what if you've ruled out a medical condition and are still sweating up a storm? It may simply be a sign that you’re in shape. (Yass!) Over the past few decades, multiple studies have suggested that trained endurance athletes sweat sooner and produce more perspiration compared to untrained people.

“The more fit you are, the more efficiently your body sweats,“ explains Tony Musto, Ph.D., director of fitness and an exercise physiologist at the University of Miami. This is a good thing, since sweating helps cool you down and enables you to lift, run, or cycle at a higher intensity for longer. (What you don’t want is your body to reach the critical core temp of 104 degrees, when people tend to pass out from heat illness or heat stroke.)

This isn’t to say sedentary folks will stay dry. There’s a relationship between sweat and a person’s maximum oxygen uptake (VO2 max), a measure of cardiovascular fitness and aerobic endurance. Research shows that the higher the VO2 max (and therefore fitness level) of a long-distance runner, the more quickly he starts to sweat and the more sweat he produces.

Here’s where it gets a little complicated: When performing the same absolute work (i.e. jogging at 5 miles per hour on a treadmill), an unfit person may reach his VO2 max more quickly than a fit person, prompting him to sweat sooner and sweat more, even if the fit person sweats more efficiently overall, Musto says. That's because the unfit person may be working at 80 percent of his VO2 max, while the fit person is only at 50 percent.

On the other hand, if both a fit and unfit individual are working at the same relative workload (i.e., 60 percent of their VO2 max), the fit person who’s running at 8 miles per hour will start to sweat more quickly and produce more sweat than the unfit person running at 5 miles per hour, Musto says. This also helps explain why the trained runners sweat more than the unfit people in the study above—they’re able to run faster and harder, creating more body heat and more sweat. 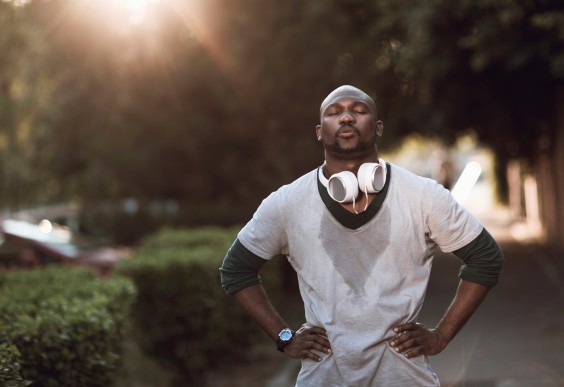 To further complicate things, a few more factors impact how much you sweat.

1. Gender
If you’ve ever walked into (or past) a men’s locker room, this news won’t come as a shock. In one study, a group of trained men and women and a group of unfit men and women cycled on stationary bikes for one hour in a studio heated to 86 degrees. The researchers looked at how many sweat glands were active during each rider’s session and riders’ overall sweat rates.

The result: Fit men perspired the most, especially during the more intense exercise. The fit women produced the second-most sweat, while the sedentary women perspired the least of any group. Even though women have more sweat glands than men, they produce less sweat from each gland, the researchers explain.

2. Body Mass
Another reason that helps explain the study's results: “Men tend to be heavier, have more muscle mass, and in turn produce more heat than women do while working out,“ Musto says. Further research has shown that the higher a person's body mass index (BMI), the more they sweat.

3. Coffee
A piping hot latte will obviously dial up your body temp, which can encourage sweating. However, if coffee's diuretic effect takes place before you work out yet you go to the bathroom prior to exercising, you may actually sweat less, Musto says. That could equal a less-than-stellar workout, so be sure to drink plenty of H2O in addition to java to stay hydrated. The American Council on Exercise recommends drinking 17 to 20 ounces of water two to three hours before exercising and seven to 10 ounces of water every 10 to 20 minutes during a workout.

4. Alcohol
Ever felt flushed after a few cocktails? Alcohol increases your heart rate and dilates blood vessels in your skin, bringing blood to your skin's surface. This in turn raises your body temp, which can cause you to sweat more. Despite what hot yoga devotees may believe, you (sadly) can't "sweat it out" after a big night out: Only about 5 percent of alcohol leaves your body through urine, breath, and sweat; 95 percent is metabolized by the liver.

5. Spicy Foods
Eating spicy foods also triggers your body temp to go up, so your body produces sweat to help cool itself down, Musto says. If you find you sweat a ton when you eat and it's making you uncomfortable, it could be a sign of Frey's syndrome, or gustatory sweating. People with Frey's sweat excessively at the mere thought or taste of any food (even ice cream). Talk to a doctor if you're concerned this could be an issue.

6. Hot Weather
This may be another “duh“ moment, but warmer days raise your body temperature, increasing heart rate and blood flow in an effort to cool down the core, Musto says. Humid weather is a double whammy: Since there's more moisture in the air, it's harder for the sweat on your skin to evaporate, deterring the cooling process.

The Takeaway
There are plenty of factors that determine how much sweat an individual produces, and just about every level of sweating can be considered "normal". Bonus: The fitter you are, the more you sweat, which enables your body to keep on running, lifting, cycling—whatever you're into—for longer. However, if you're constantly sweating like crazy, especially in one specific area, it could be a sign of a rare condition called hyperhidrosis. Check with a doc if you're concerned.

More Reading:
Sweat-Tested: The Best Antiperspirant Deodorants
The Best Health and Fitness Tool You're Not Using
Couples Who Sweat Together Stay Together: How Exercise Can Improve Your Relationship